You can see in the pics below that the overall appearance hasn’t changed. The upgrades I chose improve the handling and reliability of the Glock 19 without altering it so that all the after market accessories and holsters will still work with the gun. With these changes the gun is considerably better and my absolute favorite.

Since the proof is in the pudding see the results of shooting 124 gr Aguila practice ammo at a 10 yard swinging target below.

Not so sure about the Glock, but I like that knife….

This might be more your style. Trumark Slingshots Normal Pull Slingshot. 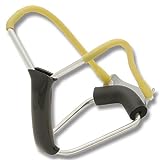 Having owned and worked on more Glocks than I can speak of, I have more than a few opinions about them.

First, I will say that I actually prefer other minimal modifications.
What I need is simple:

Steel sights, preferably nite sights. (Tru-Glo TFO, Meprolight or Trijicon)
Trigger modification (contouring the trigger safety bar to the trigger face)
I normally cut the magazine release down, removing the serrations and rounding the edges on it. For concealed carry it’s much better.

Here’s one I used and carried for a number of years, used on duty and in a number of classes.

One other modification I like is a grip modification.
In my case, the arched housing area on the back of the grip frame makes the gun shoot high when shot instinctively aka point shooting, and I have to ‘break’ my wrist to shoot targets with a proper stance/grip.
Here’s a G21 that I used for over a decade, with the backstrap modification, the finger grooves removed and cutouts for stuck mag removal.

I wore the stick-on grip surfaces off repeatedly, finally retextured the grip area with a surface that was both aggressive and yet concealable.

The Pearce (and other) grip plugs can be nice but also leave a place for junk to collect from the top.
I’ve had both good and back luck with them, but with my modified grip frame, that area is filled in and the plugs don’t fit anymore, but the effect is the same.

I still don’t like the ‘small’ frame Glocks, they don’t fit my hands right, even after modification.
But I do have a G30 tucked away behind my hip.
Lightly modified of course.

Here’s a trio of Glocks including the previously mentioned 30 and 19L (cut down 17) and a 20 with ‘treebark’ texturing that I’ve come to favor.

Whirlibird You have a great collection of Glock’s.

Very nice stippling work. Thank you for the insight.

Actually I’m down to just the 30 right now.

The rest were allowed to leave when friends and customers decided they needed them more than I did/do.
Moving the shop wasn’t inexpensive.

I’m in the process of gathering some more and rebuilding them how I want them, as well as shop examples.
I’m looking at a couple of 22’s to chop into 23L models (like the 19L above), and a 23 to chop to fit 27 mags.

However the 20 will be replaced regardless of which others I get, it is honestly the best Glock available, accuracy, power and capacity combined. And the large frames fit my hand nicely.

Did I mention that I don’t like Glocks? True.
I don’t like them, but I have a good amount of respect for them.

And in my experience, they’re not bomb proof, I’ve broken several and sent a number back to the factory with cracked frames. But they are a good 20 year gun, then send it back when the frame starts having issues.

I’m curious what kind of ammo did that to do the gun. Was it a hand load or a squib from a manufacturer? Also if you don’t mind me asking what caliber?

Factory G21 Gen4. .45ACP
Handload well within specifications. No double charge, no bullet setback. The same machine was used to load thousands of rounds before and after without issue.
The barrel and slide were fine, no damage so no double charge.
Bad case head, thin case head walls. Seen this a number of times over the years.

Luckily it was a .45 not a .40, the difference in pressure is why the shooter wasn’t truly injured. (Bruised but no blood)
I did the autopsy on the gun, and sent it back to Glock for a new frame. They agreed with the analysis.

The shooter (cop) called me from the range, I picked it up from where it fell. Never did find the mag catch.

Thanks for the updated info. Out of curiosity what would have happened if the same round was fired out of an all steel frame gun like a Sig or 1911?

Well I can say that a steel framed 1911 will have no issues other than wood grips cracking.
Been there, got the tshirt. Years ago, a great many 1911’s were overamped by hack smiths and the slightest pressure would open up the case head.

Sig’s aluminum frame P220 tends to both crack grips and can expand the frame a bit, depending on the severity of the pressure problem, a double charge will make a mess of the gun.

A few years ago, I ended up with a box of commercial reloads for the 10mm.
I was practicing for department qualifications and was going to shoot the G20 first.
For some reason I went with a Colt Delta Elite first and had two case head failures in the first magazine.
Bad cases again, the ammo was “Fed-Lite” velocity.
I didn’t save the cases but one of the other rounds from that batch was later fired in the same Delta with the same results.
Unmodified barrel ramp, and has handled much heavier loads without any issues both before and after.

The gun was and is fine, still running today.
Had I shot the G20, it would have opened up worse than the above 21.

He and I have matching sling shots.

Or did you mean combat guns?

For a 20 year gun, I don’t mind the polymer guns. You just need to consider their lifespan, time not round count.

In a steel frame, the CZ75 and good clones are some of the best feeling and handling guns out there, especially after a little tuning. My opinion now.

The Smith 45xx series are built like tanks and are as heavy as one also. About the only issues I’ve ever encountered were a broken extractor and a bad rear sight.
My last 645 was a beast and would shoot with my Gold Cup for accuracy.

The 1911. I will never be without one or more. I have 30 years working on and with the platform, nothing is as natural in my hand after all these years as a lightly modified 1911.

In modern guns, bluntly you can’t really go wrong with a Glock, H&K, S&W or S-A. You just have to accept that they won’t be functional to use in 100 years if your great grand kids need them.

Unlimited funds? Grab and go?
A Sphinx. And that’s saying something from a guy who builds custom 1911s.

SJ, my son stole my slingshot.
I need to get another.

Is the CZ 75B made the same as the CZ75? Also I see some of them made of stainless steel are they the same?

You must be logged in to reply to this topic.